Take a look at this string of numbers:

At first it looks like someone fell asleep on a keyboard. But there’s an inner logic to the sequence:

The sequence never ends, but that won’t stop us from asking us questions about it. What is the ratio of 3s to 2s in the entire sequence?

(If that doesn’t seem very intuitive, think of it as the expected or average number of $3$s preceding a $2$.)

Setting that equal to $r$ and multiplying out, we get:

What we have actually shown is that, on the assumption that there is a ratio $r$ that the partial ratios (ratios of initial segments) converge to, it can only be $1+\sqrt{3}$. It’s certainly plausible that there is such a limiting ratio, and computing the ratio for initial subsequences encourages that thought, as the ratios are observed to tend quickly towards that value from above. But to be rigorous we need to prove it.

Here is a plot of the positions of $2$s and $3$s in the self-generating sequence. 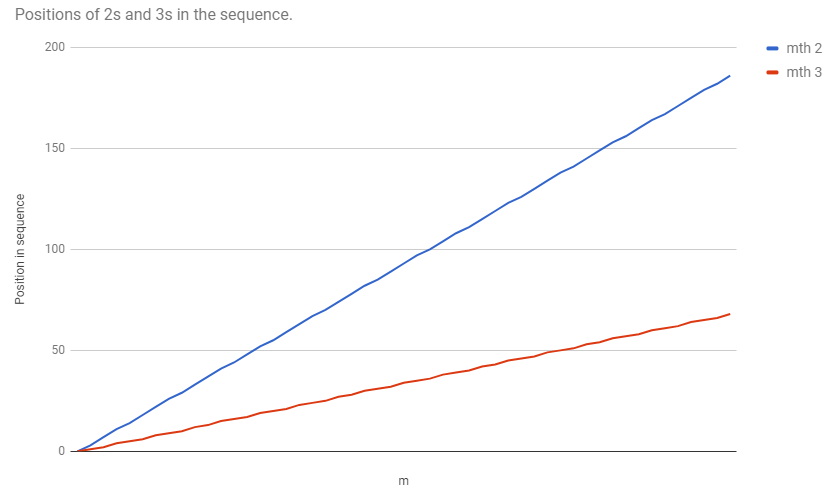 (We are numbering from $m = 0$, and to clean up the math we count the initial position for both a $3$ and a $2$ as $0$—no harm, because starting the sequence with a $2$ does not change any other element of the sequence.)

These plots sure look approximately linear, with wiggles that start small, and while they remain the same absolute size, they get less significant comparatively as you zoom out. Supposing the ratio $r$ of $3$s to $2$s is indeed $1+\sqrt{3}$, we can deduce the average slopes of these plots. The slope of the plot for $3$s is the average number of sequence positions per occurrence of a $3$, so it is the inverse of the density of $3$s in the sequence, and so it is $(1+r)/r$, or $(1+\sqrt{3})/2$. Similarly, the slope of the plot for $2$s is $2+\sqrt{3}$. Now let’s look at the same plots (in a close-up) together with the two lines that have precisely those slopes. 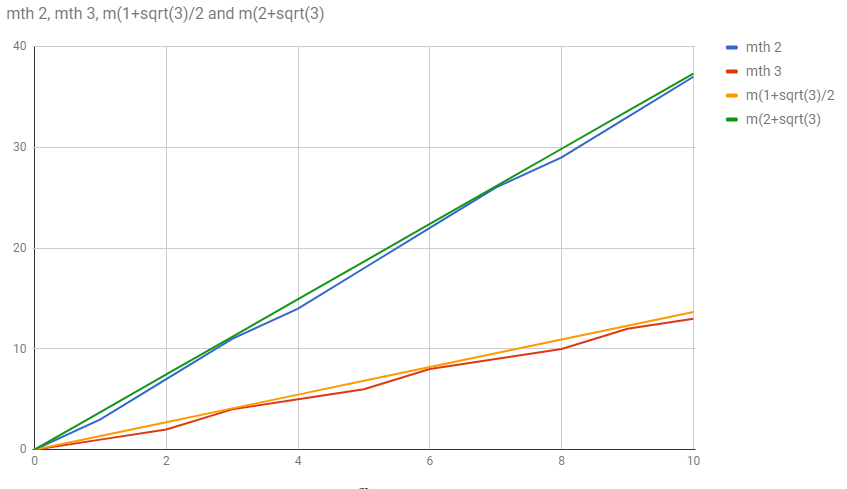 The plots never exactly match the lines for any non-zero $m$—they can’t because the lines, having irrational slopes, have no points with integral coordinates except the origin. But the plots diverge from the lines by less than $1$ at every $m$ we see. If that remains true for all $m$, then the plots are described by the following formulae for the position of the $m$th $2$ or $3$ (where the brackets denote the floor function, which yields the greatest integer less than or equal to its argument):

Let’s prove the conjecture that the $m$th $2$ in the sequence occurs at position $\lfloor m(2+\sqrt{3})\rfloor$, or for short, $\lfloor mt \rfloor$. (Much of the proof is lifted from a solution to a Putnam Competition problem. Thanks to my brother for the link; before seeing it I had a less elegant proof of the ratio’s convergence.)

(These brackets are the ceiling function that returns the least integer greater than or equal to its argument.)

We don’t need to similarly prove that the positions of $3$s given by $m(1+\sqrt{3})/2$ (for short, $ms$) for positive $m$ also defines the self-generating sequence, because it is easy to confirm that $1/s + 1/t = 1$, which makes the sequences generated by $\lfloor tm \rfloor$ and $\lfloor ms \rfloor$ for $m \geq 1$ Beatty Sequences, which we therefore know together contain all positive integers without repetition. So the $\lfloor ms\rfloor$ sequence for $m > 0$ must indeed contain the positions of exactly the $3$s in the self-generating sequence.