Consider a standard, two-player, 52-card game of War. If I start with just the four aces, and you start with all 48 other cards, randomly shuffled, what are your chances of winning?

Rules for this game vary and are often incompletely specified. I will assume that cards played in a “war” are shuffled before being returned to the bottom of the deck of the player who wins them.

The Python code below does a ten-million-run Monte Carlo simulation of the game, and the percentages of victories for the all-aces player, assuming one, two, and three cards are played face-down in wars, respectively, are 80.9%, 71.7%, and 65.5%.

For the one-face-down-card version of the game, there is an interesting pattern in the frequencies of the possible game-lengths, where a game’s length is its number of rounds, and where a round is considered to conclude when a player wins cards. 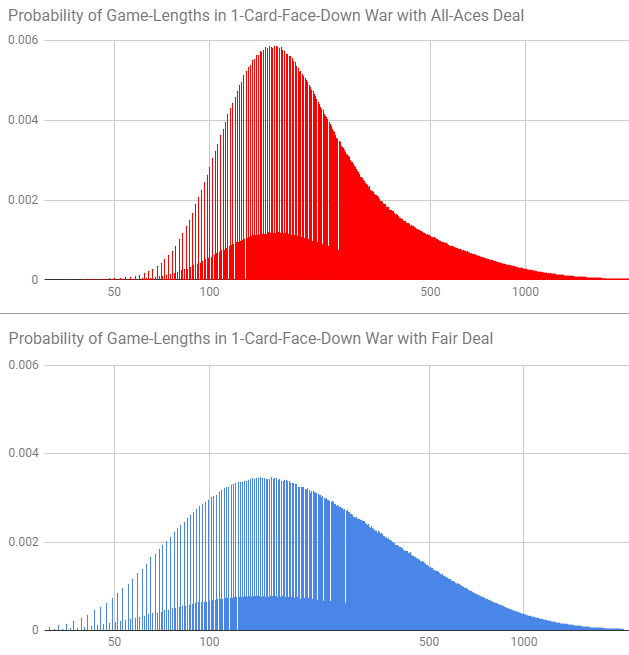 Inspection reveals that the chart columns for odd game lengths form a curve well below the higher curve formed by the even ones. This means that even game-lengths are observed much more frequently (about five times as often) as odd game-lengths. A good puzzle is: why should that be? Give it a think, or read on for what I believe is the answer.

Say that a game after R completed rounds is an “even state” if R plus the number of cards in the loser’s deck is even. All games start in an even state, and a game lasts an even number of rounds iff it ends in an even state. Non-war rounds preserve the evenness of the game-state, since R increases by 1 and the loser either gains or loses 1 card. And so do decided war-rounds, because R increases by 1 and the loser’s cards increase or decrease by an odd number. Therefore a game can only exit an even state by the loser having one too few cards to play a battle (and thus losing the game). About 1 in 6 games end in that way, and only these games last oddly many rounds.