The classic birthday problem asks about how many people need to be in a room together before you have better-than-even odds that at least two of them have the same birthday. Ignoring leap years, the answer is, paradoxically, only 23 people — fewer than you might intuitively think.

But Joel noticed something interesting about a well-known group of 100 people: In the U.S. Senate, three senators happen to share the same birthday of October 20: Kamala Harris, Brian Schatz and Sheldon Whitehouse.

And so Joel has thrown a new wrinkle into the classic birthday problem. How many people do you need to have better-than-even odds that at least three of them have the same birthday? (Again, ignore leap years.)

This is an exercise in combinatorics. For a group of $n$ people, there are $365^n$ possibilities — all equally likely — for what all of their individual birthdays might be. If we can count the number of these possibilities in which there are at least three people with the same birthday, we divide and we’re done.

1. Who are the paired people?

It will be easiest first to count how many ways of writing a list of $k$ pairs there are. This is easy: we have $n$ choices for the first person listed, $n-1$ for the second, and so on down to $n-2k+1$ for the last; the product of these numbers is the number of lists.

This will over-count ways of pairing people into $k$ pairs, and in two ways. Given any list, we get equivalent lists for any of the $2^k$ ways of switching first and second within pairs, and we get an equivalent list for any of the $k!$ permutations of the listed pairs. So, having counted lists of pairs, we divide by $2^kk!$ to yield the number of ways of answering our first question:

2. What birthdays do these paired people have?

3. What birthdays does everyone else have?

There are $365-k$ birthdays left, and we have to distribute $n-2k$ of them to the remaining $n-2k$ people. Reasoning exactly as we just did in answering the second question, we count the number of ways of doing this:

Computationally, we find that this probability first exceeds $.5$ when $n$ is $88$. 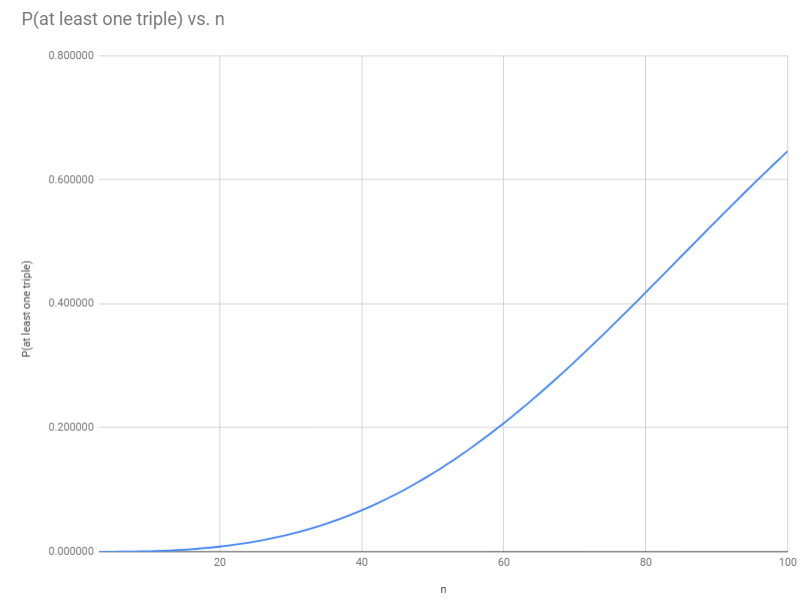